Upon my travels of the internet I found this – I know it’s old, but the old ones are often the funniest!

I left you last time with a marriage of an engine and a gearbox mated together – which even I wasn’t sure would have worked until we managed it!

The next issue to tackle was that of actually starting the car. Our adapter plates were taken back to our local engineer with some more rough scribbles, and they were returned with some new holes. 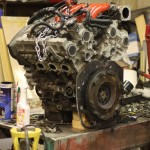 A minor tweak, and the starter bolted up to the engine, and in line with the flywheel – and then, for the moment of truth… would it work?

Success! Next, to get the starter fitted to the gearbox. A small bit of cutting later… 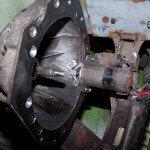 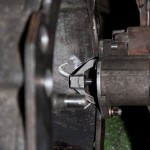 As you can hopefully see, the starter is rather close to the crossmember – and the gearbox is currently lifted higher than it will usually sit – which means that the starter will be trying to sit in the crossmember, so some modifications are required.

So, we cut away a section, and reinforced where we’d removed, as well as reinforcing where we’d cut away the original engine mounts, as we’d not be needing them. 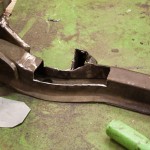 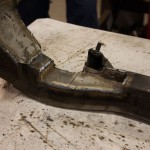 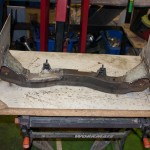 The eagle-eyed among you may have noticed a couple of blocks of wood between the front crossmember and the sump of the engine in the final picture of my last update – this is what was supporting the engine in the right position. I don’t think that would have been a long-term solution, so a proper engine mount is required.

Upon my browsing of forums as I usually do of an evening, I happened upon someone selling a brand new engine mount from a Honda Integra DC2 – which looked like it might fit the bill. I promptly purchased it, and work began on making it fit. A large chunk of the original engine mount was removed, and a wonderful looking mounting bracket was created. 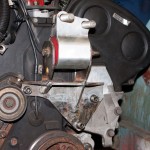 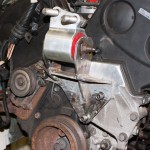 In order to support this, we’d need some quite hefty bracing, so the remainder of the bodywork was removed, and some additional box section was grafted into place. 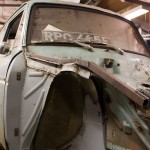 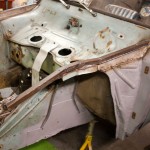 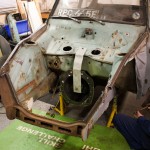 The engine was then lifted back into position, and the front engine mount was affixed securely to a beefy bit of box section, and the engine suspended from it, and the gearbox crossmember. 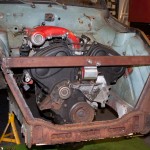 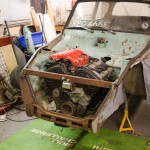 With the front and rear mounts sorted, something was needed to stop the roll of the engine. Using the mount from the Honda Integra gave me another idea. I often see Hondas with “engine torque dampers” to reduce the engine movement from their huge torque outputs *snigger* – these are small units which don’t take up much room… perfect for this case.

So, a couple were purchased, and mounts made to prevent the roll on the engine. 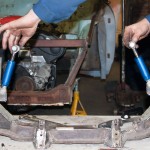 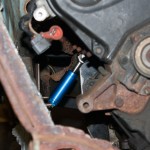 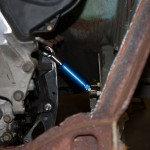 There we are – that should damp more torque than the 2 Hondas they were no doubt previously destined for!

And finally – another treat, a video which is “out of order” of the text above, but I couldn’t leave this update without putting it in!