With the engine & gearbox out and on the bench, it’s time to do some of the bits that are easiest done whilst the engine isn’t in the car.

When I removed the engine from the Galant, it was late one evening and I had limited tools, and I was unable to separate the gearbox and transfer box, or remove the torque converter! So, in the limited time I had, I decided the easiest thing was to remove the sump – so this needs to be sealed up properly again. Whilst the sump was off being cleaned, why not give it all a little squirt of paint to tidy it up a little? 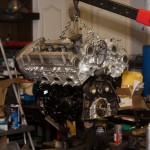 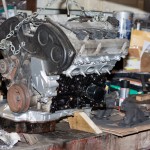 The very bottom sump pan isn’t in great condition, so I’ll be looking for a replacement – hence why it’s not been painted yet!

Also gave the exhaust bits a lick of high temperature paint to cover the bare welds. 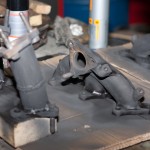 During storage, the original 200SX gearbox got slightly waterlogged, and it’s no longer particularly smooth. I managed to pick up another gearbox in good condition, doing a swap for the 200SX engine. This then needed modding as the original did to fit the starter motor and the water manifold to the engine. As it was originally modded in the car, the cuts weren’t the neatest, so with the new gearbox on the bench, the modifications were made again, neater, and with a closer fit. It then had a good clean down, and a squirt with some paint as well. 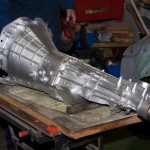 Whilst the paint was drying, another small patch on the chassis, this one to cover over the original holes for the pedals, and cleaned up and slightly enlarged the holes cut out for access to the coolant pipes in the bulkhead, and for ease of fitting the alternator in the inner wing. These holes will have small ridges welded around them for screw-in panels at a later date. 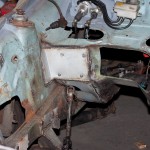 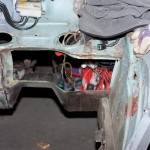 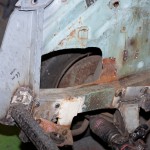