Continuing the tradition of “do something when we think about it”, the next thing we decided to tackle was the seats.

Going to the magical store room of bits that my dad has acquired over the years, we managed to find a pair of seats that were originally in a Mitsubishi Lancer Evolution VI, that were removed by Ralliart when they fitted the Recaro seats prior to selling them through the UK dealer networks.

So, we measured up, marked, measured up again, cut, put in place, and bolted/welded some supports to the floor, which will both reinforce where the seats will sit, and also allow the seat to be both level, square, and moveable. 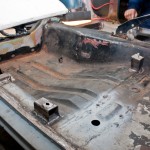 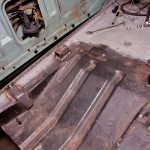 This then allowed the seats to be put in place, and bolted down securely. 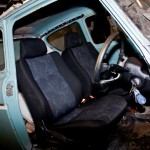 Attention next moved to the engine again, and the eternal question that we’ve been asking since deciding to use this engine… how are we going to actually plumb in all of the inlet pipework!?

I’ve been wanting to put an intercooler at the front of the car, not only does it look cool, but it will keep the inlet temperatures down. Which would mean combining the output from the two turbos, installing the intercooler, piping to and from it, and then round to the inlet on the back of the engine. Not to mention, that the pipework from the filter to the turbos also has to be put in place!

This made the decision on the pipework much simper – it wouldn’t need to come down to the front of the car, so that space can be free up for pre-turbo pipework, and more essential stuff like a coolant radiator and fans!

To that end, we got to work.

First off was to turn the compressor side of the driver’s side turbo round, and making up a bracket to hold the wastegate actuator in the correct place. 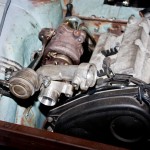 From the original VR4, I had the Y pipe that usually runs across the top of the engine, and I also acquired another. These got chopped up for bits, and a new Y pipe was made, bringing the outlet from both turbos to the centre of the engine, to head to the back, ready to loop round and into the throttle body.

As they say, a picture is worth a thousand words… 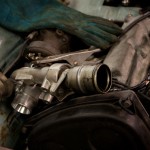 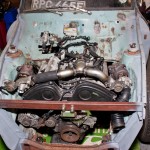 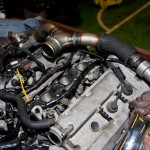 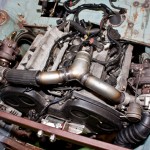 A couple of brackets will need to be removed from the intake plenum so that it will sit down flush, but that’ll be a task for next time. 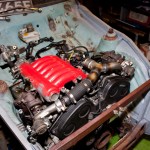