Although it’s hardly happened so far, which I for one am exceptionally surprised about, something that we’ve done hasn’t been quite right, and could be improved upon.

This something was the brake & clutch master cylinders.

The place we’d positioned them previously meant that the movement on the arms from the pedals wasn’t entirely smooth, and there was little space between them and the throttle body, so getting some kind of pipework onto the throttle body would have proved very difficult.

Therefore, it was decided to move them, and do our most major bit of bodywork refabrication to date.

A section of the bulkhead was cut out, and a new bit welded in which will allow the master cylinders to be recessed slightly, and further back. 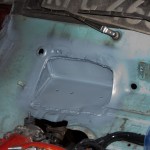 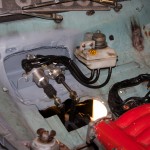 This brought the arms from the pedals to a more upright position, and is acting more directly on the pistons within the cylinders. It also gives more clearance between the throttle body and the pedal arms, which was then improved further, by a few modifications to the inlet plenum. 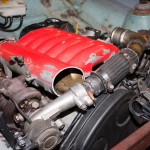 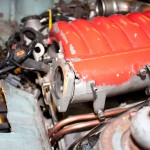 Due to the reorientation of the turbo and the inlet pipework, the plenum required a few brackets removing, and an end chopped off, so that it will sit fully down onto the engine. A small amount was taken from the end where the throttle body is, to angle the throttle body upwards slightly, again giving more clearance for the intake pipework to fit.

The plenum will be taken to be welded up fully soon.

Some water pipes were also made up on both sides of the engine for cooling of the turbos. 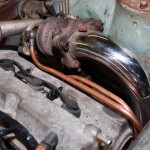