Now that the car can drive again, my dad has been able to move it around when he needs access to his workshop. However, doing so means starting the engine from cold each time, and something hasn’t been quite right with it, it’s not been wanting to fire up first time. Once it’s going, and it’s got a little warmth, it will restart fine – but it’s also been running exceptionally rich, dumping in lots and lots of fuel.

Something didn’t seem quite right, so it was time to don the diagnostic hat, and see what didn’t look right.

The VR4’s ECU has a diagnostic connector, physically similar to OBD (On-Board Diagnostics), but uses Mitsubishi’s own communication protocol. Luckily, someone has figured this out, and for just $25, you can purchase EvoScan, which allows you to read data from the engine ECU. A small price to pay for the awesome features you get. You have probably seen a shot of this running on the laptop in a previous video, along with the MAP-CAL software for the MAP-ECU unit.

Adjusting this is quite a simple process, thankfully. Firstly, place a 0.65mm feeler gauge between the stop and the butterfly wheel to partially open the throttle. Then, remove the connector plug, loosen the two bolts holding the TPS sensor, and rotate the sensor until the point where you lose connectivity between the bottom two pins – these are the pins for the Idle Position Switch – when there’s continuity between the two, the throttle is fully closed.

With this adjusted, the TPS reading in EvoScan was a more healthy 12.2%

I also noticed that the Coolant Temperature Sensor was reading -59 degrees C. I know it’s been a cold June, but not quite that cold!

Checking the sensor, we found no continuity between the sensor ground and the relevant sensor ground pin on the ECU. Tracing back the wiring, it seems we’d omitted the ground wire – if that’s our only wiring issue so far with the amount we’ve removed and chopped, then I’m not too displeased!

All the other sensors looked OK, no readings that jumped out as being wildly inaccurate.

With all of this checked, we tried to fire up the engine – it now bursts into life on the first turn of the key, and seems to be running slightly less rich than it was – it now knows that the coolant is at the correct temperature, so isn’t applying quite such a high cold start enrichment (it adds more fuel when cold)

With it starting and running nicely now, we decided to revisit the cooling system – the Mini radiator was always only a temporary solution until we had found something more suitable, which I now have.

After removing the temporary radiator and fan, I attached a more suitable fan to the car, as well as mounting a radiator that will fit in the space available – this is from a Skoda Felicia – and is within 1cm of the dimensions we scribbled on the bulkhead a few months ago. It will be replaced with a new radiator in time – whether it’s a replacement OEM one to the same spec, or whether it’s a higher performance custom-made job – well, I’ll see how it fares with this standard one whenever it’s on the road. 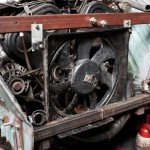 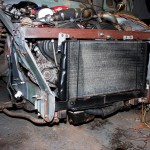 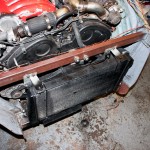 There, I said it. There’s so much excess wiring from the VR4 that I’m not needing in this car, and because everything’s in different places, and the car is smaller, there’s lots of wiring to do. It’s a daunting process, and it’s not often I feel like doing it.

However, it needs doing, so I decided to tackle it.

I started off by trying to undo the spaghetti tin of wiring that I had draped over the passenger footwell, to try to make some kind of sense of it.

This was a process that took a good couple of hours, just taping together wires that run parallel for more than 6 inches to see what goes where. And when I was done with that, I’d not removed any wiring, it wasn’t the final product, but it at least gave us a chance of seeing what goes where and what subsequently doesn’t need to be there.

Then came the task of tracing a wire, cutting it, re-routing it, and joining it back together. Repeat this hundreds of times for a different coloured wire, over and over, for hours on end, with only a few brief breaks for a cup of coffee and a biscuit… 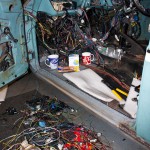 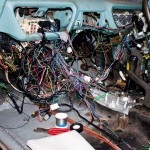 It still looks a bit of a mess, but wiring is a task where you need to do 95% of it before it looks like you’ve actually done anything with it.

On the plus side, the passenger floorpan is now mostly clear of wires, there are a number of bits which are properly loomed up and neat, and there’s a large pile of wires and connectors which have been removed, the only real evidence of actually having done anything…