The timing of this update is quite apt, having just received an email from Old Skool Ford forum listing their Favourite Projects, and included in the list is my little project! So, a huge thanks to the staff at OSF for the shout in their mass email!

It starts with a quick trip to collect some shiny bits for a good price, and to try to squeeze it into the back of a Fiesta because I forgot to pick up the hacksaw I placed in the hallway the previous night before leaving – which in itself was quite a feat of engineering! 😉 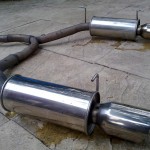 Having successfully collected the exhaust, which was previously fitted to a VR-4, the backboxes were chopped from the pipework, and lifted into place to measure up and see what it would look like with the 5″ exit… the answer… a little stupid, especially on such a small car! No pic, unfortunately!

So, the outlets were also chopped off, and the boxes were lifted into place to measure up for the other pipework.

The exhaust bits already on the car were marked, cut, and adjusted to follow the line of the floor better, and in preperation for adding of the next parts. 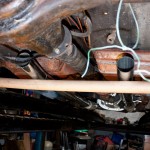 I also purchased some 2.5″ stainless over-axle exhaust sections, as they were available cheaper than making our own sections or buying various angled bits and welding together ourselves. These were fitted to the backboxes, and some brackets were made and welded to the chassis to support via some new exhaust rubbers. 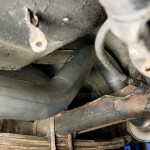 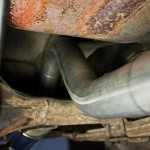 Moving onto tailpipes, and we again utilised some offcuts from a section that has provided other parts of the exhaust, which was the enclosed ends of the bumper bar which forms the turbo elbows. The rear valance was roughly chopped to accomodate the second tailpipe, and they were fitted. 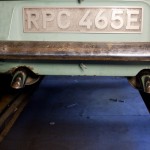 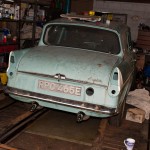 The enclosed bits were removed to give a pair of downdraught tailpipes – and hopefully nicely subtle! 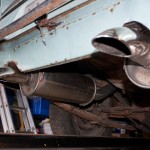