Last time, I managed to get as far as hooking up a couple of hoses from the chargecooler to the bulkhead.

So the task this time was to complete the chargecooler circuit, which involved running pipework to the rear of the car, through the boot floor and to the radiator box, which still needed a bit more to easily hook up the pipes. 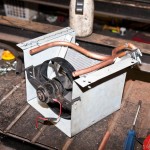 Forgot to take any images, but the chargecooler system is now completely plumbed up, including an old coolant header tank as a reservoir, and the pump is hooked up to the trigger for the fuel pump, so is running whenever the ignition is on. An adjustable temperature-activated switch is still to be installed, which will switch the fan on when the coolant temperature in the chargecooler circuit gets to a specific temperature – which is yet to be decided!

Having had a bit of temporary pipe on the inlet, which had to be bunged up with an old injector, it was time to change this to a proper bit of pipe, with the correct outlets on it – such as for a blow-off valve (BOV – also known as a dump valve, or diverter valve)

The job of the BOV is to relieve excess pressure in the intake when the throttle is closed.

When you accelerate a turbo’d engine, the exhaust gasses drive the turbine on the turbo, which in turn drives the compressor on the turbo, which takes air at atmospheric pressure, and compresses it to a higher pressure – the standard TD-03 turbos on the 6A13TT will compress the air to about 10 PSI above atmospheric pressure (which is 14.5 PSI). Once compressed, there are more oxygen molecules in a given volume, and this allows more fuel to be introduced, which creates a bigger bang in the engine, and therefore more power (and more exhaust gasses) – the process repeats over and over.

If there were no BOV, then this compressed air would try to equalise pressure by the easiest possible route – which would be to try to go back out through the compressor of the turbo – this can cause the compressor of the turbo to be attempting to compress the air, whilst the already compressed air is trying to come back the other way – causing the compressor wheel (and, because they are linked, the turbine wheel) to stop turning, or even attempt to turn the opposite way (fighting against the exhaust gasses still trying to turn the turbine the correct way) – this can cause a “fluttering” noise. This is also known as compressor surge.

You can hear it a bit in my previous videos, but the following video also shows it off well:

To prevent this, the BOV is installed in the inlet pipework after the turbo, and before the throttle body. This is a large valve, operated by a diaphragm, which has a spring inside to hold it closed, as well as a vacuum/pressure pipe which is attached to the manifold (after the throttle body) – when the turbo is producing a positive pressure in the intake manifold, this pressure also assists in keeping the BOV closed by pushing against the diaphragm. Spring + compressed air pressure on one side of the diaphragm is a larger force than the compressed air pressure in the intake pipework.

When you close the throttle body, the intake manifold then goes into a vacuum, which pulls against the diaphragm – this vacuum, combined with the positive pressure of the intake pipework, allows the valve to open – giving the compressed air in the intake pipework an easy route to escape, without going back through the turbo compressor wheel.

On most production cars, this is routed back into the intake *before* the turbo – a recirculating valve. Especially where a MAF (Mass Airflow Sensor) is used, where the air has already been accounted for by the engine ECU. It is less of an issue where a MAP (Manifold Absolute Pressure) sensor is in use, because this air has not been accounted for yet by the ECU.

The Anglia has no pipework before the turbos to route this air to – therefore the BOV used is a Vent To Atmosphere (VTA) one. A VTA BOV is what gives the “pssssstthhhh” noise that you associate with a turbo car. 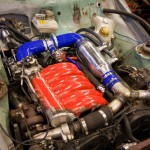 With the inlet pipework and BOV now correctly hooked up – there is no loss of pressure in the inlet any more, and a small touch of the throttle causes the boost to climb quite quickly! It’ll be fun to drive…!