So, I’ve concluded that I suck at taking photos and keeping this updated!

I’ve had a couple of trips to my dad’s since the last update, and have failed to take any photos!

The first trip involved removing the engine/gearbox, and sorting out a couple of small oil leaks, which came from the lack of gaskets on the turbo oil return pipes. Whilst the engine was out, a new sump pan was also fitted, to replace the corroded one that was on there.

Also, whilst the engine was out, the area we had cut away from the bulkhead to facilitate the water manifold and radiator hoses was looked at and mostly replaced, and we now have just a small removable panel to make and fit.

The second trip was more eventful, as we decided to take a day off from working on the car, to go and show it off at the annual Anglias At The Ace meet, organised by 105speed. The Friday evening was spent tidying up to make it somewhat “presentable” – it had a wipe down with a damp sponge and dried off with a towel, the passenger seat was re-fitted, the remaining cables under the dash were tidied with a few cable ties, and I even screwed in the glove box lid and ashtray/heater control panel!

Saturday morning, we loaded up onto the trailer, and headed off for the Ace Cafe, my dad towing my Anglia, and me driving his, and arrived to a mostly empty car park, being about the 8th Anglia to arrive. We unloaded the trailer, and parked up, and awaited the rest of the arrivals.

The day didn’t disappoint, with 54 Anglias all together, and I had a great opportunity to speak to many people about the car. 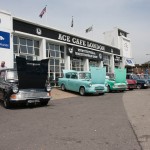 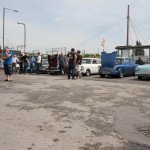 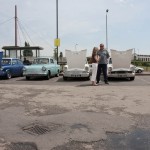 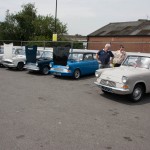 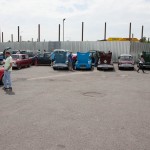 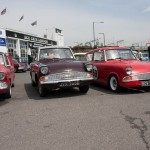 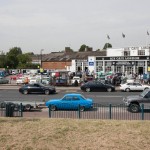 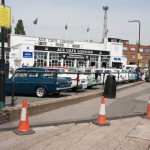 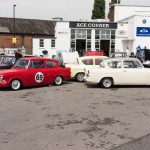 And our two cars, including my dad posing with his cup of coffee! 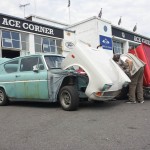 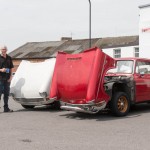 On our way back, we had a radiator blow out on the Shogun, which left us stranded at the side of the A406 for over 8 hours awaiting a truck to be provided that could recover the Shogun + trailer back home! So, that was quite a bad end to an otherwise great day!

I hope that normal service will resume next update, and I’ll try to take some more photos!