A couple of months ago, I came across an interesting game which is still very early in development, that rather piqued my curiosity.

The game is – the premise is that you start off post-war (1946) as a budding car designer/maker, and you need to design and build cars, progressing through time, making new models, utilising new technology and generally trying to make as much money as possible.

Whilst this sounds fairly cool, the “tycoon” part of the game isn’t made yet. When I first saw it, it was basically an engine creator – allowing you to make Inline 4, Inline 6, and V8 (crossplane & flatplane) engines, both naturally aspirated and turbo. Unfortunately, no V6 engines yet… (can you see where this might be going…)

A recently released update adds a number of features to the car designer, mostly around wheel/tyre, brakes and suspension, as well as adding a number of new performance statistics which are updated based on the options you choose.

So, what better than to get a few ideas on performance on something that’s rather similar to what I’m actually building! 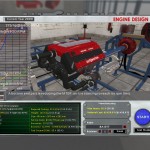 Not too bad 🙂 On the 6A13TT, the peak torque comes in a little earlier, and holds a bit higher towards the red-line – but close enough for now!

So, onto the next part, which is designing a vehicle for it to go into. There’s a number of body styles available, but nothing that will allow me to make the unique shape of the Anglia, so I’ve settled for something that looks a little more like a Mk2 Escort.

Whilst the body shape is important in Automation to the aerodynamics, and subsequently the performance, neither an Escort or an Anglia are the most aerodynamic of cars out there, so we’ll take the estimations as just that, and instead concentrate on the meat that I’m interested in – that being suspension and tyres.

For this, I’ve chosen MacPherson strut for the front end, to mimic the Escort setup I’m using, and I’ve selected the “solid axle coil” to represent the rear – my De-Dion acts most like a solid axle in terms of bounce and roll, it just doesn’t have the heavy diff in the middle.

You can specify camber (in degrees), spring stiffness (in Newtons per meter, 25000 N/m = ~140 lbs/in for those of you who work in old money), damper rate (in Newton-seconds per meter), and anti-roll bar stiffness (in Nm/rad, Newton-meters per radian)

I’ve currently got 140lb springs on the rear, and I have put an estimate of 200lb springs on the front, based on what I’ve seen people using on other vehicles with heavier engines up front – so these have been plugged into Automation.

These suspension settings will give you results for roll, weight transfer, body bump, and when matched with wheels/tyres (where you can specify wheel diameter, tyre size and compound) will also affect acceleration and cornering.

So – by putting in some known values from what I will be using (13″ wheels, 185/60 tyres), along with the engine/gearbox settings (5 gears, top theoretical speed based on gearing of ~160mph) and an overall weight (I’ve chosen 1000kg) and weight distribution (roughly 50/50) – my dad’s 4WD Anglia weighs 980kg and has near perfect 50/50 weight distribution, so a good baseline.

Putting all of that together gives the following results:

There’s a number of graphs, but I’ve put up an interesting one in the image – the Acceleration graph. The blue line shows that it calculates that in the first 3 gears, I will have too much power for the tyres to cope with. It’s not until I hit 4th gear at approximately 7 seconds that I’ll have enough grip to utilise the full power of the engine.

Obviously, here’s where everyone jumps in and tells me that of course, the engine is too powerful for the car, and that I’m doing it all wrong.

However, where’s the fun in that? 🙂