In my excitement to post up the video last time, I didn’t get round to adding some additional photos that were taken. So… here they are!

I start this update again with another photo of the engine and gearbox out of the car – this time to finish welding up the exhause downpipes where we couldn’t get to them whilst it was in the car. We also took the opportunity to begin tidying up and re-routing some of the cabling from the engine, as our work last year to route it all through the existing heater hole was beginning to look a little too untidy for my liking. 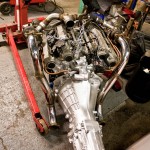 The engine and gearbox went back into the car, and we put the remaining engine wiring back on, and continued to re-route and tidy, and in the process put all of the engine wiring into waterproof plugs, so that it’s easy to disconnect from the rest of the car. 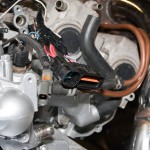 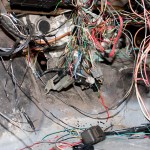 Once that was done, the engine bay is looking a lot neater without all that wiring on show. 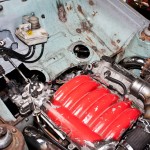 Then onto the daunting task… sorting out the rest of the wiring. We had already removed quite a lot of unneeded wiring last year by removing everything attached to the automatic gearbox ECU, but it still left a large amount, so it was time to try to plug it all together, and work out what went where in the original Galant, so we can begin cutting unneeded bits out. 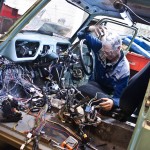 Now… what goes where again?

Once everything had been laid out and identified, we began to cut out the unneeded bits – AYC wiring, Active Stability Control wiring, ABS wiring, rear doors, heated rear screen, stereo wiring… To do this, we removed all the existing spiral wrap and insulation tape, and began at the endpoints of these systems, separating the wiring into “wanted” and “not wanted”. The “not wanted” bits were chopped out when we reached a connector plug, and then chased from the other side of the plug and removed. 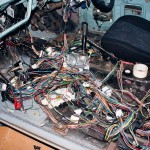 There’s probably still more to come out, but we’d identified a large amount to remove, and we were confident that what we had was sufficient to get to the final end goal of the weekend – which was to start the car! You’ve seen the results of that already!

On a visit to the scrap yard, we spied a nice bit of aluminium pipe which looked like it might have been perfect for the inlet tract – so we quickly knocked together the remainder of the inlet. The straight bit off the Y-piece will be replaced with a water-to-air charge-cooler. 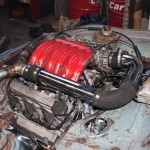 So… what was does the un-needed wiring look like…? 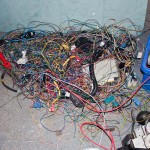 That doesn’t even include any of the automatic transmission etc stuff we removed last year!

And finally… the final bit of original Anglia wiring to be removed, the front-rear loom: 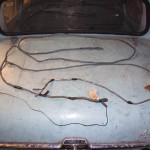